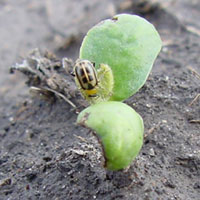 Like many plant viruses, BPMV is spread by an insect. In the North Central region, the most important insect vector is the bean leaf beetle, Cerotoma trifurcata. The bean leaf beetle feeds on soybeans or other legumes infected with the virus and transmits the virus particles to the next plant on which it feeds.

How the virus spreads


There are three potential sources of BPMV:

Although the level of virus transmission by overwintered beetles is low, beetle populations in the upper Midwest are at historically high levels, and thus even low rates of transmission through beetles may be important. In a two-year study reported in the journal Plant Disease, bean leaf beetle population densities were linearly related to BPMV incidence in both years, indicating that BPMV epidemics were greatly influenced by the bean leaf beetle.

Similarly, the high beetle populations may make low rates of transmission through seed (less than 0.1%) important in the development of virus epidemics.

Finding out how BPMV spreads is an active area of research. It is possible that all three sources of the virus play important roles, depending on the specific location and environment.